The Adoptive Difference: New Evidence on How Adopted Children Perform in School A child who has been abandoned or removed from the care of both birth parents can gain much from being adopted into a loving family. Adoptive families typically provide the children in their care with residence in a safe, supportive neighborhood, attendance at a well-functioning, high-achieving school, and love, emotional support, and intellectual stimulation at home.1 These environmental benefits should enable the young person to rise above the loss of their birth parents and any adverse experiences and enable them to flourish—or so current models of children’s development would lead us to believe.

Yet adopted children and their parents often encounter unexpected difficulties, especially when the child gets to school.2 Our analysis of newly-released data from the U.S. Department of Education shows just how prevalent learning and behavioral issues are among adopted students in elementary, middle, and high school. The data derive from a 2016 survey of the parents and guardians of a nationally-representative sample of 14,075 students in public, private, charter, and home schools across the country.3 The sample included 436 adopted students.4

Adopted Students Are More Likely to Have Trouble in School

Adoptive parents reported that an 83% majority of their children enjoyed going to school and nearly half—49%—were doing “excellent” or “above average” school work.5 But when compared to students living with their married biological parents, there were substantially more adopted students who performed poorly on indicators of academic progress and school adjustment. As the figure below shows, adopted students were:

On the other hand, adopted students were no more likely than other students to be absent often from school (for 11 or more days during the school year). 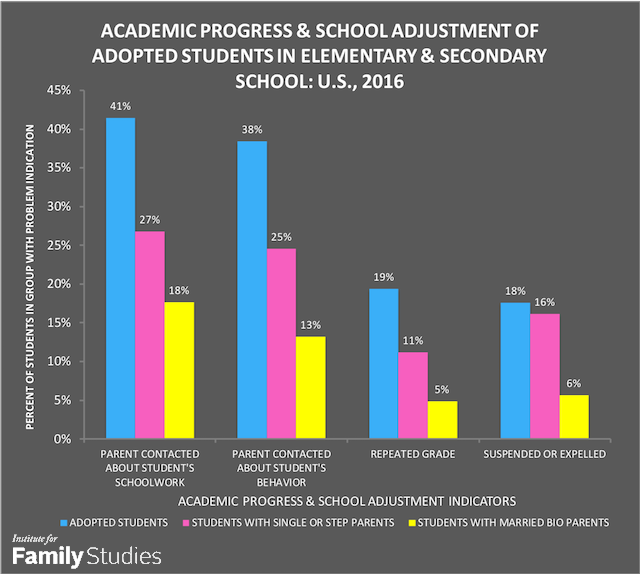 When we used regression analysis to adjust the academic performance indicators for disparities across groups in related factors like parent education, family income, and age, sex, and race of the students, we found that adopted students continued to have significantly higher problem rates. Indeed, because adoptive families tend to be well above average in income and educational attainment,6 the statistical adjustments sometimes magnified the differences in problem frequencies. After adjustment, the odds on adopted students repeating a grade or having a parent contacted for behavioral issues were 4 times higher than those for students living with married birth parents. The odds of having parents contacted for schoolwork problems were three times higher, and the odds of being suspended or expelled were 2.85 times higher.

Adopted students had greater odds than students from single-parent or step-families of having parents contacted for schoolwork or behavior problems, and of repeating a grade. Their odds of being suspended were not significantly different from those of students with single or step parents.

The Majority of Adopted Students Have Health Problems

A 54% majority of adoptive parents reported that a health or education professional had told them that their child had a condition that affected their ability to learn, get along with other children, or engage in physical activities. The comparable figure for students who were not adopted was 23%, and for students living with both married parents, 18%. As shown in the following figure, the most common conditions with which adopted children were diagnosed were attention deficit disorder (36%), specific learning disability (23%), speech impairment (16%), and developmental delay (15%). All of these proportions were significantly higher than those for non-adopted students, which are shown in the figure below. 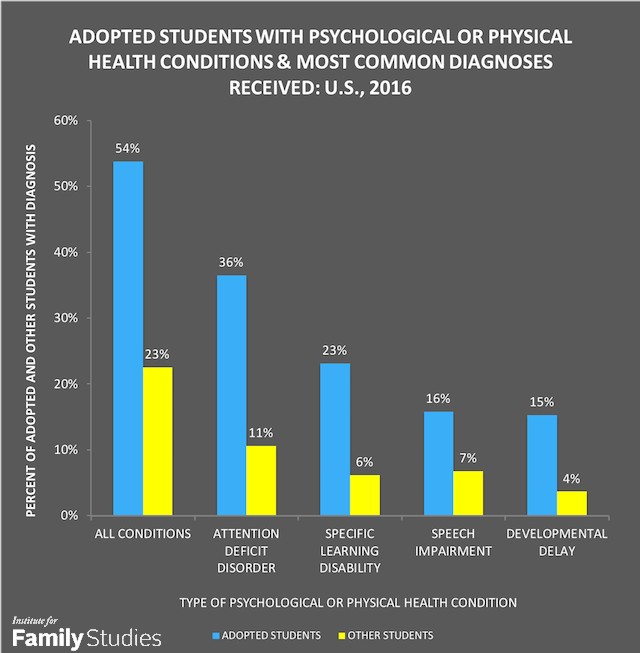 In addition, as shown in the figure below, 12% of adopted students had been diagnosed with a severe emotional disturbance, and 7% with a severe intellectual disability. The comparable proportions for all non-adopted students were 3% and 2%, respectively. In comparison, the proportion of students living with both married birth parents who had a severe emotional disturbance was only one percent. 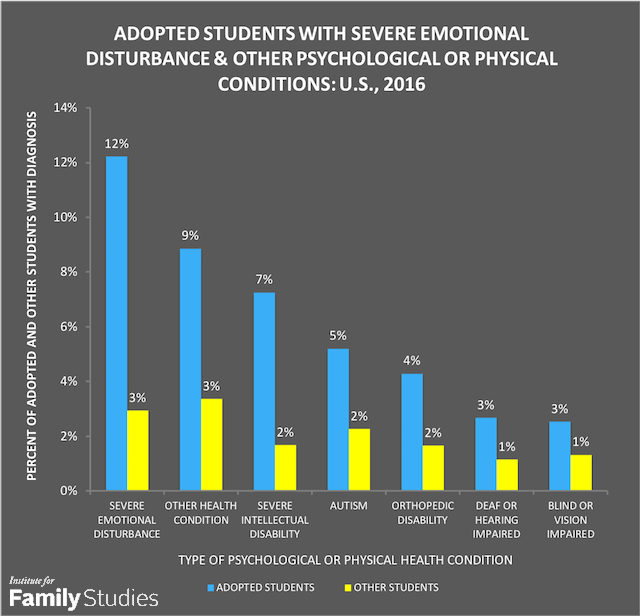 After adjusting for demographic and socioeconomic factors, the odds of a student being diagnosed with one of the psychological or physical conditions mentioned above were five times higher for adopted students than for students living with both married parents. They were also significantly higher than for students in single- or step-parent families, as well as those living with cohabiting biological parents.7

Is it primarily adopted students with a diagnosed psychological or physical condition who have learning or behavior problems at school? To answer that question, the figure below compares adopted students with and without a diagnosed condition on the same achievement and adjustment indicators presented in Figure 1. Adopted students with a diagnosed condition were significantly more likely to have repeated a grade (28% versus 9%) and to have had their parents contacted about their schoolwork (53% versus 29%). They were also less likely to be described as doing excellent or above average schoolwork (29% versus 71%). As shown in Figure 3 below, they appeared to have higher rates of suspension and parent contact for classroom behavior problems. The latter differences were not statistically significant, however. Nor was an apparent difference in the proportion of students who did not enjoy going to school. 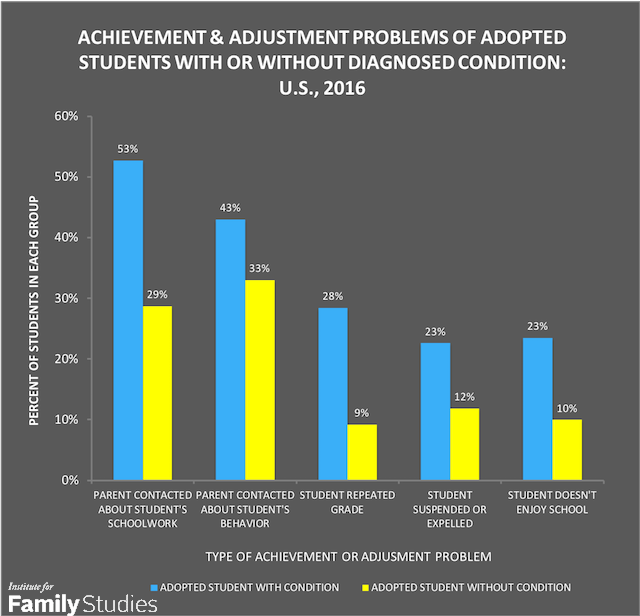 Why Do Adopted Students Have More Problems in School?

Based on the circumstances surrounding their births, it is perhaps not surprising that adopted children tend to struggle in school. Infants and older preschool-aged children who become available for adoption are usually the results of surprise pregnancies. Their birth parents may have given them up voluntarily, feeling unwilling or unable to care for the child themselves. In some cases, they may have had the child removed from their care by a court or child welfare agency after allegations of alcoholism, substance abuse, mental illness, neglect or child abuse on the part of one or both parents. Thus, the circumstances surrounding the birth and early care of most adopted children can be problematic, to say the least. At worst, their family conditions were highly stressful or downright toxic.

Based on the qualities of the adoptive homes in which they currently reside, however, one might expect that adopted children, especially those adopted in infancy, would do well in school. In general, adoptive families tend to be better off financially than other families with children. This is partly due to self-selection and partly to the screening that adoptive parents must go through before they are allowed to adopt. In addition, adoptive parents have higher levels of education and put more effort into caring for their children than biological parents do.9

As the survey results show, many adopted children do perform well in school, learning up to their potentials and getting along well with other pupils. Even among those who have difficulties, a majority enjoy going to school and receive counseling and special education services to help them and their parents cope with their health conditions.

There is little question that adopted children are better off than they would be in long-term foster or institutional care. At the same time, the survey data reveal the complex challenges adopted children face in overcoming the effects of early stress, deprivation, and the loss of the biological family. It is vital that current and potential adoptive parents be aware of the challenges they may face, as well as the eventual benefits that will accrue to them and the child as a result of the love and resources they provide and the struggles they endure.10

6. For example, 58% of the adopted students in the 2016 NHES had adoptive parents who were college graduates or more. Only 7% had less than a high school education.

10. Sacerdote, B. (2000). The nature and nurture of economic outcomes. NBER Working Paper No. 7949. Cambridge, MA: National Bureau of Economic Research.